In 2010, then gubernatorial candidate Rick Snyder was embroiled in a kerfuffle over whether or not he outsourced jobs while at Gateway.  In 2013,  a bigger outsourcing problem is brewing– Governor Snyder is outsourcing education.

Governor Snyder is convinced that in order to plug the “brain drain” and stay competitive we must outsource education to out-of-state experts and DC!  Willingly, he supports Common Core which transfers the authority over Michigan education standards and assessments to the National Governors Association (NGA) and the Chief Counsel of State School Officers (CCSSO) and the federal government.

But don’t worry Governor Snyder told us at his live town hall in Grand Rapids, “it’s evolving….we haven’t ceded control of everything…we have a voice at the table.”

Why are we ceding control of ANYTHING?

In the good ol’ days, when parents didn’t like something going on in their school they went to their local school board and issues were resolved quickly.    Then the state school board and Michigan lawmakers began to take on more responsibility  Education became less personal and more difficult to have a voice in the process but parents trusted their officials.   Then the State School Board adopted Common Core State Standards and joined the Smarter Balanced Assessment Consortia.   Public school standards and assessments are now privately owned.  Governor Snyder said, “I think the Common Core is a really important opportunity, and I think it’s a good thing,”

Moving PUBLIC education standards and assessments out of Michigan to a PRIVATE trade association is a good thing?!?

Outsourcing education to an unelected unaccountable bureaucracy  is NOT a good thing.   It’s a terrible thing.  Even worse, it’s been three years since we adopted Common Core and we still don’t know who is in charge!  No one will tell us.   The Common Core website says that the long-term sustainability structure has not been developed.  Governor Snyder told us the feds are “highly involved.”   So who are parents supposed to call if they don’t like a pornographic book recommended by the standard or an assessment question?

Governor Snyder, if you outsource education at least wait until AFTER the governing structure has been developed so we can assess their trustworthiness.    Adopting the Common Core and ceding control before we know the governing structure is like handing your car keys over to a random teenager walking down the street!  As my teens would say, that’s just crazy stupid!

Governor Snyder, you may believe Common Core is a higher standard which will require our children to think critically.  Well, how about employing a little critical thinking in your decision to support the Common Core.  Outsourcing education standards and assessments to an out-of-state yet to be developed board of unelected unaccountable bureaucrats doesn’t pass the critical thinking test.

Do you really want to face another outsourcing kerfuffle in the next election? 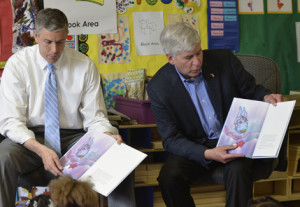