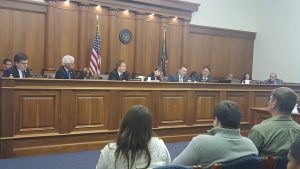 “It is time to end the disastrous national experiment that is Common Core and let Michigan manage its own destiny to achieve excellence in our education system,”

Thank you Senator Pavlov, we wholeheartedly agree!  We would also like to thank Senator Colbeck for sponsoring SB 826 and his leadership on this important issue.

Speaking to a reporter at MLive, Senator Colbeck added

“We’re going to repeal Common Core standards, which is kind of a race to the middle, and replace them with standards that actually get us to the top echelon,” said Colbeck, the bill’s sponsor. “If you review the standards, they’re solid.”

The standards that will replace Common Core, science, and social studies are the highly-regarded Massachusets standards used in the 2008-09 school year.  Dr. Sandra Stotsky spoke to the committee today via tele-conference.   In her remarks, Dr. Stotsky addressed

1) Status of Common Core in Massachusetts

The most important reasons for Michigan to repeal its Common Core standards are:

1. Common Core’s standards are not rigorous and do not make students ready for a high school diploma, never mind authentic college coursework.

2. Common Core’s standards lack a research base and international benchmarking. The “lead” standards’ writers lacked background experience and competence for writing K-12 standards (David Coleman and Susan Pimentel in ELA, and Jason Zimba and William McCallum in mathematics). None had teaching experience in K-12, and there is no record that they used appropriately the feedback they received from hundreds of reviewers.

3. A K-12 mathematics curriculum tailored to Common Core’s mathematics standards and tests does not support the strong K-12 science curriculum developed by the state’s science teachers to address the state’s pre-NGSS science and pre-engineering standards.

Michigan should replace Common Core’s standards with the Massachusetts pre-Common Core standards because:

1. Massachusetts pre-Common Core standards in ELA, mathematics, science, and history/social science are the only sets of K-12 state standards in the country with empirical evidence to support their effectiveness. They are also among the few sets of K-12 standards thoroughly vetted by high school teachers and academic experts in the subject areas they address.

2. A statewide organization of parents, legislators, and others (www.endcommoncorema.com) has gathered enough signatures to place a question on the November election ballot that would repeal the state’s adoption of Common Core’s standards, restore its pre-Common Core standards, and provide guidelines for revising them in the future.

3. The costs for switching are minimal. The standards are free, and most of the original test items from 1998 to 2007 are free and available, requiring a company only to assemble them and handle logistics and reporting. Moreover, no extra professional development was needed by the state’s teachers to teach to them. The lists of recommended authors by educational level in Appendix A and Appendix B in the ELA curriculum framework were approved by a large majority of the state’s English teachers, and all test items were vetted by them.

4. State tests based on the Bay State’s pre-Common Core standards evoked no complaints from parents or students, and took up much less preparation and testing time than Common Core-based tests seem to need. All used test items (except “anchor” items) were released annually and used by teachers for instructional purposes.

5. The content of all the Massachusetts pre-Common Core standards and tests was vetted by a number of academic experts, and standards were placed by the state’s teachers at appropriate grade levels. They also participated in setting passing scores and performance levels, along with parents and legislators.

6. Michigan has a demographic profile that is not too different from that of the Bay State. Michigan’s minority population is a bit larger, but not that different. Moreover, all demographic groups improved in the Bay State and could do so in Michigan, especially if there were similar reforms in your education schools and in licensure tests. Michigan could easily adopt the required reading fundamentals test still used in Massachusetts (I helped to design it, based on my graduate work at the Harvard Graduate School of Education). It has been adopted by CT, NH, NC, MS, and WI.

7. I strongly recommend adoption of the MA 2003 History and Social Science standards, or at least a close look at them before the state considers any other set of history standards. The MA standards were checked by a multitude of scholars to ensure they were historically accurate as well as fair in their coverage of geography, economics, and civic concepts and required civic reading.

Dr. Stotsky’s testimony becomes more important as the bill moves to the full Senate and also in the House Education committee where HB 5444 has yet to be taken up.  According to a report by MLive, “Senate Majority Leader Arlan Meekhof, R-West Olive, has no timeline on the legislation, said his spokesperson, Amber McCann. Meekhof is currently focused on moving the state budget and resolving outstanding issues like the Detroit Public Schools rescue package, she said.”

We encourage parents and citizens to contact their Michigan Senator and Senator Meekhof at (517) 373-6920 or by email at SenAMeekhof@senate.michigan.gov and tell them to vote YES on 826.

Please also contact Representative Amanda Price, the chair of the House Education Committee: Strongly, but respectfully urge her to move this important bill forward to a vote in her committee. Her phone number is 517-373-0838 or by email at AmandaPrice@house.mi.gov