In 2006, Bill Gates said to a group of elites at the Aspen Institute,

The business of philanthropy is thinking through the way to change something.It’s just this simple: You have some money, and you have some things you’d like to see different.”

Michigan parents have another wealthy philanthropist who would like to see changes in education, Betsy DeVos.  It’s not a secret that Betsy DeVos seeks to influence elections with money, endorsements, and campaign assistance through Great Lakes Education Project (GLEP) and the Michigan Freedom Fund.  The Detroit News recently highlighted former MI GOP chairwoman Betsy DeVos’s involvement in the primaries.

The education project is actively involved in Republican primaries for seats in the Michigan House of Representatives. The organization has endorsed GOP candidates and incumbents in 43 state House races this year. Support from the project can range from an endorsement to direct campaign contributions and independent spending supporting or opposing particular candidates…. (Source: Detroit News)

DeVos said her focus this year is more on down-ballot Republican races than the presidential contest.

“I’m not going to get all wrapped in that one office,” she said. “I’m going to be focused on what I can do to help other races down the ticket, for certain. And specifically on this issue of school choice, to do everything I can to highlight and promote it as an important issue for us to embrace.”  (Source: Detroit News)

Stop Common Core in Michigan has highlighted GLEP in the past.   Please read:  Who is GLEP and Why their endorsements matter.

In short,   GLEP is a strong supporter of the Common Core and its continued implementation in Michigan. They are part of the Michigan Coalition for High Student Standards which opposes SB 826 to Repeal and Replace Common Core, science, social studies, and aligned assessments with pre-common core Massachusetts standards.  Stop Common Core in Michigan believes there is a high correlation between candidates who accept the GLEP endorsement and their future votes on legislation.

GLEP claims NOT to have a litmus test on Common Core.  This allows candidates to say they are against common core and still gain the endorsement of GLEP.   But DeVos 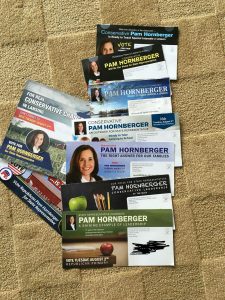 Like Bill Gates, Betsy DeVos has some money and has some things she’d like to see different.   Like all good investors, DeVos likely expects a return on her investment.  And if you don’t play the game under their rules and vote the way you want her to vote, you may find yourself challenged the next time you run for office.   As the Detroit News states there is “independent spending supporting or  opposing particular candidates. ”   (emphasis added)

In practical terms, what does that support or opposition look like?   Here’s a photo of the mailers sent to me by a constituent in the 32nd State House in Macomb County.   It is a three-way race between Hornberger, Shmina, and Tranchita.    Shmina and Tranchita have signed the Stop Common Core pledge, Hornberger has refused to sign it.   She has received the GLEP endorsement and at least $9,000 in DeVos family donations  according to Hornberger’s Late Contributions Report.

I asked Hornberger about the support of GLEP on her Hornberger for State Representative FB page. She said,

“ GLEP donated $250 to my campaign. GLEP sent mailers in support of me to conservative voters in our 32nd District. Again, they have confidence in my ability be a competent servant leader for the 32nd, regardless of the fact that we disagree on certain issues. I had no knowledge of the support mailings by GLEP until I receive them in the mail. They are a surprise to me. “

If Hornberger wins the primary,  it will be interesting to watch how she and other GLEP endorsed candidates and  GLEP endorsed incumbents vote on education initiatives.   We’ll be watching especially the vote to Repeal and Replace Common Core (HB 5444/SB 826) which GLEP does NOT want to see passed.

We encourage all voters to know the facts and make an informed choice.    Here is a list of candidates who signed the Stop Common Core in Michigan pledge.

(Please note:  Stop Common Core in Michigan does NOT endorse candidates.  The names used in this post is NOT an endorsement for or against any candidate.)