Education Savings Accounts (ESA) are becoming very popular with Republicans in Congress and state lawmakers.  As a homeschool parent and education activist, I oppose ESA, so do many grassroots homeschoolers and groups around the cou 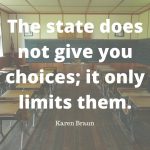 ntry.  Homeschoolers know that the state does not give us choices;  it can only limit them. We are vocal in our opposition and politically active.

Congressman King found that out the hard way when he introduced HR 610 to provide federal dollars to private and home school student.  King was slammed with opposition from both the grassroots and the Homeschool Legal Defense Association (HSLDA).   (See article: Homeschoolers Revolt on School Choice Bill.)

Along with Congress, individual states are attempting to pass voucher or ESA legislation.  HSLDA opposes ESA at the state level also.  On March 2, HSLDA Attorney Jim Mason wrote an article calling them “fake” savings accounts and told homeschoolers not to “sell our birthright of homeschool  freedom for a mess of debit cards.”

Nevada was the first state to pass universal education savings account legislation but it is tied up in legal issues.  Nevada homeschool activist, Barbara Dragon, sums up the choice very well,

“When private schools/accept “taxpayer funding” the government sets up “accountability” measures that will limit their liberty, that is the real choice each must make.”

Texas is in a heated battle over ESA. Many conservative lawmakers “thought” they would have homeschoolers on their side.  They were stunned to find out homeschoolers oppose ESA and were very informed on the issue.

I anticipate that the ESA issue will hit Michigan as part of  so called “school choice.”  Secretary of Education Betsy DeVos is a long-time advocate of school choice and vouchers.  Her first attempt to pass them in Michigan through a state wide ballot was rejected by voters.  There are rumors that the Trump administration may use federal dollars as incentives to push states to implement vouchers. School choice/ESA means NO real choice for parents. With federal money comes federal control. That’s just how the game is played.

Several articles have been published recently selling versions of vouchers, ESA, or debit cards.  Senator Colbeck (R) wrote an op/ed touting the value of Education Savings Accounts.   The homeschool community in Michigan is watching and learning from Nevada and Texas.  Many are fired up thanks to the actions of Representative King.  Based on my conversations with homeschoolers around the state,  any legislation introduced to provide Education Savings Accounts to homeschoolers in Michigan is likely to be opposed very strongly by many here.

As a long time homeschooler in Michigan and the mom of two Marines, I know the value of our freedom and I’m not about to sell out for a hand out.    I know that with government money come government controls.  That’s just how the game is played.

I hope you will join me and other homeschoolers across the state and oppose any attempts to push Education Savings Accounts to home or private schools in Michigan.