We have heard rumblings about repealing Common Core in Michigan and offering NO replacement.  This would be a “FAKE” repeal.  A ‘fake” repeal provides a political win for politicians, but a substantial loss for children.

“Repeal and not replace” approach looks different than in other states, like Indiana, where Common Core was repealed, then replaced with Common Core standards with a new name, a rebrand.  In the March 15 hearing on HB 4192, it was mentioned by the representative of the Detroit Regional Chamber of Commerce that only one state, Oklahoma, has resigned from the Common Core in a substantial way.  All the others who have made changes have “basically rebranded standards for the most part.”  Michigan is hoping to to join Oklahoma and resign NOT rebrand the Common Core.   A fake repeal is the same as no repeal.

If we repeal Common Core without a replacement, Common Core will remain the defacto standard.  It will continue to be the overwhelming predominate model of teaching in the classroom, not because it is good for kids, but because it will still drive the curriculum, the assessments, the teacher development, the training content for new teachers.

HB 4192 is crafted to establish the best standards as the model foundation.  Districts are free to continue using Common Core or they may switch to this better model.  Since it is a local decision, parents and community members can work with their elected school boards to determine the best solution for their students.  A fair assessment will enable either set of standards to operate effectively.  Locally elected boards become accountable to the parents and voters.

The Wayne County RESA Superintendent presentation by Dr. Paul Salah at the March 15 Michigan Competitiveness Committee showed slide after slide of how low socio-economic students score poorly on all assessments.  He cited a study done from U of M reinforc 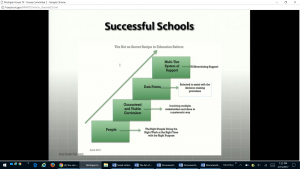 ing his claim that socio-economics is a reliable predictor of student achievement.  His inference is that poor children cannot learn.

From 2003 to 2009, Massachusetts black and Hispanic students all showed remarkable improvement in both math and reading both at the 4th grade level and the 8th grade level.  Many experts, including Fordham Foundation, attribute this improvement to the excellent foundation of the MA standards & assessments in place during this time.

Citizens in MA know the old standards were best.   Since changing to Common Core, MA black & Hispanic student achievement has been flat.   In 2016, MA Common Core opponents collected over 30,000 signatures for its proposed measure, far in excess of the amount needed to secure a spot on the November 8 ballot. The measure would have required Massachusetts to repeal Common Core, which it adopted in 2010, and replace it with the state’s old standards.  Unfortunately,  the ballot initiative was killed  by a judge on a technicality.

A 2017 NAEP study by U of M shows Michigan students have continually made the least improvement in student achievement since 2003.  With all due respect, Michigan educators and legislators have not demonstrated the ability to improve student learning.   Parents certainly can do better!  Pass 4192, a REAL Repeal & Replace Common Core!