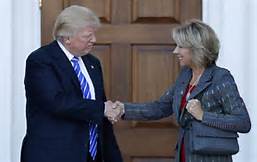 We, the leadership team at Stop Common Core in Michigan, respectfully ask President-elect Donald Trump to immediately remove Betsy DeVos’s name from consideration as Secretary of the Department of Education.  We do not make this request lightly but with considerable knowledge regarding her negative influence in Michigan as a proponent of Common Core.

Michigan turned red for Trump for the first time since the 1980’s.  A large number of voters in Michigan were attracted to the Trump campaign because of his emphatic message against Common Core.  Michigan voters know that most Republicans in our state say they are against Common Core but do nothing to stop it.  We believed Trump would be a different kind of Republican and “drain the swamp” in education.  We believed that until the nomination of Betsy DeVos.  DeVos is part of  “the swamp” in Michigan.  She represents both a special interest AND as an influential Republican fought EVERY effort to stop Common Core in Michigan with her money and political influence.

We respectfully submit that Betsy DeVos’s recent claim that she is against Common Core is not an accurate representation of her actions regarding  Common Core or the competency-based centralized education system the standards help build from prenatal to career.  We have done our “homework” as she encouraged; we support our claim with the following reasons:

1.  Betsy DeVos funds and serves on the board of the Great Lakes Education Project (GLEP).
DeVos founded GLEP in 2001 and served as chair until 2008; she currently serves as a board member.  GLEP is a special-interest education political action committee.  One of the stated priorities of GLEP is “implementing” and “maintaining” Common Core “high standards” reform.  The GLEP document “The Conservative Case for Common Core” clearly articulates their support of Common Core.  No retraction has been issued.  Only after President-elect Trump nominated DeVos for Secretary did she attempt to distance herself from the pro-Common Core position of organizations such as GLEP.   She wrote on her very new web page Q & A,

“Have organizations that I have been a part of supported Common Core? Of course. But that’s not my position,”

DeVos cannot distance herself from GLEP and their position that easily.  As a founder and major donor, DeVos’s mission IS GLEP’s mission.   Now that the standards are implemented in Michigan, GLEP’s mission is to maintain the so called “high standards” and build the assessment and accountability framework around them.

2.  Betsy DeVos and GLEP are lobbyists for Common Core. 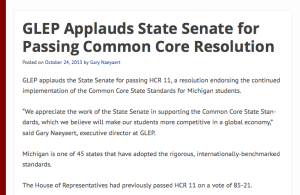 DeVos is a business woman who advocates for education reform in Michigan.   DeVos and GLEP lobbied the Michigan legislature to implement and maintain Common Core and related reforms.   Former MI State Representative, now State School Board member-elect,  Tom McMillin recently spoke to our team about DeVos and her claim that she is against Common Core.  McMillin, a strong opponent of Common Core, recalled that in 2013 DeVos specifically told him she was for Common Core during the very contentious legislative debate to stop implementation.  With the help of DeVos and GLEP,  resolution (HR-11) was abruptly passed through the Senate on a voice vote.  The hasty vote allowed Common Core to continue.  GLEP publicly applauded the resolution and the continued implementation of Common Core.

3.  DeVos and GLEP seek to influence elections in order to continue implementation of a Common Core aligned centralized education system.

It is not a secret that Betsy DeVos or GLEP seek to influence elections with endorsements and campaign assistance.  Like all investors, DeVos expects a return on her investment.  Candidates who receive a GLEP endorsement face intense pressure to continue the reforms she desires.  Those reforms include the continued implementation of Common Core or so called, “high standards,” accountability, and school choice.

DeVos did not initially get on board the Trump train. Trump’s anti-common core rhetoric did not match her own position and agenda.  She indicated she would work on down ballot races and to push school choice.   The DeVos definition of school choice is the freedom to choose which Common Core aligned charter school will test and track your child from cradle-to-career. Local and parent control do not exist in DeVos’s education reform model.  Data and government funding drive the decision.  In a nutshell, school choice is centralized control to meet the demands of the state and regional business not the dreams of the child.  If confirmed, DeVos will hire people who share the same vision of common core aligned centralized education system to help her run the Department of Education.   The exact opposite of his goal to “drain the swamp.”

In 2014, we began talking about DeVos and GLEP and why their endorsements matter.   We were also tracking candidates who were “for” and “against” Common Core.  We began a roll call of the candidates and noted if they received the GLEP endorsement on our website.   We explained our reasons clearly.  We believed there was “a high correlation between those who accepted the GLEP endorsement and their future votes on legislation.”  On June 8, 2014 we received an email from Gary Naeyaert requesting that we refrain from referencing GLEP or their endorsements in any future communication.  We did not reply.  On June 9, we received a second email:

“Let me be as clear as possible. If you continue to make false statements about [our] organization, you will be hearing from our legal counsel.”  – Gary Naeyaert, Executive Director of GLEP.

These are the intimidating tactics of a bully who is determined to get his way and silence any opposition.  After the 2014 election, Naeyaert bragged on Twitter about the results and sent Karen Braun the following tweet,

@SpunkyBraun If tonight’s election results are a referendum on #CommonCore, looks like we’ll continue implementing them. #miprimary

Naeyaert’s actions occurred under the leadership of Betsy DeVos.  Threatening ordinary grassroots moms that oppose DeVos or GLEP and bragging about continued implementation of Common Core is NOT the kind leadership needed if President-elect Trump is serious about fulfilling his campaign promise to get rid of Common Core or removing federal intrusion in education.

5. DeVos or GLEP  have NOT reached out to the Stop Common Core in Michigan team.
They do not owe us a phone call or a follow-up tweet.  But one would think that after fighting us for so long and threatening legal action that either DeVos or Naeyaert would have made some attempt to reach out and let us know they changed their position. They have not. The first time we heard about Betsy DeVos’s new position on Common Core was last week when she posted her statement after the nomination.  Now is not time to trust our children’s educational future to a candidate whose only evidence that she is against Common Core is a single statement on a recently created web page.

6.  DeVos and GLEP have NOT supported Michigan legislation SB 826 or HB 5444 to Repeal and Replace Common Core.
Legislation to repeal and replace Common Core and related assessments was introduced in the spring of 2016.  Neither DeVos nor GLEP have expressed support for the bills.  In fact, GLEP  partnered with pro-Common Core Governor Snyder and others in the Michigan Coalition for Higher Standards to OPPOSE the bills.  The bill quickly passed the Senate Education Committee but has not been voted on by the full Senate.  We believe that GLEP and the coalition’s opposition to SB 826 is a significant reason it has not passed.

7.  Betsy DeVos supports  “high standards” on a national level.
DeVos, like Huckabee and many others, knows that the term “Common Core” has become toxic.  In her statement, she now makes the claim she is against it while still supporting “high standards.”  A change in terminology does not mean a change in mission.  DeVos has never renounced national common “high standards” but understands that they are a necessary component of her goal to deconstruct local/parent control in education.  If Betsy DeVos is confirmed, it is appears that national common “higher standards” will continue unabated regardless of what they are called.

8.    Betsy DeVos’s nomination was praised by stalwart common core advocates Jeb Bush and Michigan Governor Snyder.
Jeb Bush, an unwavering supporter of Common Core, praised the nomination of Betsy DeVos.  That should not be a surprise to anyone.  DeVos serves on the board for Bush’s Foundation For Excellence in Education.   The nomination was also praised by Michigan Governor Rick Snyder.  Bush and Snyder have been vocal in their support of Common Core and a “new vision” for “prenatal to life-long learning” seamless education pathway.   Few grassroots activists who are truly anti-Common Core have praised her nomination.  That is telling and speaks louder than any recent website statement about the true vision of Betsy DeVos. 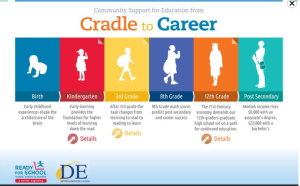 9.   Betsy DeVos will continue the push toward a “new vision” in education.
In his praise of DeVos, Bush referred to her ability to take bold leadership in a “new education vision.”  We very much doubt that he is referring to Trump’s promise to get rid of Common Core which is the opposite of Bush’s plan.   When a pro-Common Core advocate talks about a “new vision” it usually means more control not less.  Common Core (or any common national higher standard) is a necessary component of a new education system.  This vision is  often referred to as school choice.

Betsy DeVos is one of its strongest advocates.   The goal of school choice is a competency-based education system federally-funded in partnership with private organizations and businesses.  Federal dollars and student data follow the child from prenatal to career.  When government funding and data follow the child so does government control over the child’s life.

10.  Betsy DeVos’s recent statement against Common Core is insufficient to counter the weight of evidence over many years during which she worked to see Common Core and related reforms implemented in Michigan.  We have no confidence that she will stop Common Core at the national level and every reason to believe she will continue to “fill the swamp.”

We respectfully ask President-elect Donald Trump to immediately remove Betsy DeVos from consideration as Secretary of the Department of Education.  After her immediate removal, we invite Betsy DeVos to join the grassroots efforts in Michigan to undo the damage common core and P-20 (prenatal to life-long learning) competency based education has brought to our state’s educational system under her very persuasive influence.