Unfortunately, Senator Colbck offers no evidence to support his claim that I am misinformed or that parents are in control.  I would  expect a whole lot more substance from a candidate running for Governor.

Senator Colbeck’s emotional response is not logical and just as absurd as his comment on encouraging math and science over advanced basket weaving.

Parents are NOT in control.

Senate bill SB 343/344 is crafted and  sponsored by Lansing lawmakers NOT parents to suit the needs of the state and regional business!  If parents were in charge then NO bill would be necessary.  The “misinformation” is not coming from me or Stop Common Core in Michigan but Lansing lawmakers who want us to believe that the STEM credential is just like a gold star or as Colbeck says it,  “good housekeeping seal” on their homework for job well-done.   We don’t need laws for parents, teachers, or districts to award gold stars.  They can already do it all on their own.  This bill sets the criteria for what is necessary to earn a STEM credential.  It will take control out of the hands of the district and place it in the hands of the MDE for centralized control at the state level.

The intent of this bill has been clear since parents defeated a similar measure in 2015, to give the Michigan Department of Education the authority to approve and credential kids for STEM careers, stripping parents and local districts of their authority.

This isn’t about putting parents or districts in control but fundamentally transforming education from  K-12 to P-20.   In 2013, Governor Snyder said:

“I want to emphasize a vision of P-20.  A PRENATAL to life long learning.  We have to get beyond the old models of saying there are silos for  for K12,  silos for community college, for higher ed,  for preschool.  They shouldn’t be separate.  They can be separate institutions.  not to threaten the institutions. But shouldn’t we make it a seamless system.  Where a student in that system doesn’t have to figure out all these tough choices but can just focus on success…and understanding it starts even at the prenatal stage and looking at is the expectant mother getting the right diet, the right primary care…”

The STEM credential is one of six career pathways in the Michigan P-20 seamless education system based on career clusters provided by the U.S. Department of Education. 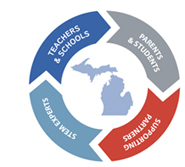 The “misinformation” is not coming from me or Stop Common Core in Michigan, Senator Colbeck.  It’s coming from you and Lansing lawmakers who want us to believe that this bill puts parents in control.  Nothing could be further from the truth.  This bill is a collaborative effort by Lansing, the STEM Partnership, and business to meet workforce needs where our children are nothing but a commodity for their bottom line.

Senator Colbeck your support and defense of this bill means YOU support the P-20 vision to track children from prenatal to career.